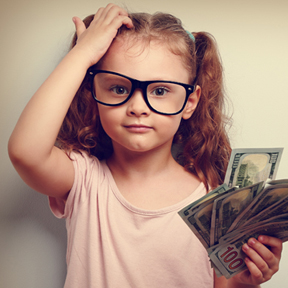 November 2018
What habits will your children learn about money? It starts with your own values, beliefs and habits. No matter what you tell them, your kids will always do as you do, not what you say.
Somewhere between the cradle and the college dorm, our children have been instilled with the values about money that they will carry with them well into adulthood. That can be a good thing, or it can be a really bad thing depending on what values were learned and how they were communicated by their parents. Undoubtedly, the issue of kids and money can be perplexing for parents who have all of the best intentions, but often find themselves on the defensive in issues about money. That may be because money is often discussed as the means to an end, or even an end, without an understanding of the underlying values of money and it works. Unlike the birds-and-the-bees discussion, the concept of money has to be demonstrated and reinforced through daily interaction.
Starting from the moment your toddler points to a toy and says, “I want!” money concepts should be taught throughout the course of your children’s young lives. More importantly, parents need to be mindful of their own money habits and how they will be emulated by their kids. More than any other aspect of life, money habits are transferred, inadvertently, when parents operate by the “do as I say, not as I do” form of parenting. Children, even at a young age, are extremely observant and impressionable when it comes to the actions of parents; and they’re more likely to emulate their parents than they are to heed their words of wisdom. Parents should be the first to know that “actions speak louder than words” and guard against transferring these bad habits to their children:

Money Does Grow on Trees

No matter how many times they are told otherwise, kids do get the impression that money grows on trees when they see their parents whipping it out every time they ask for it. And, many times, kids don’t even have to ask for it. Money is often dispensed as a way to stop a tantrum in a store or as consolation to a disappointed teen. Each time parents go for the wallet, it perpetuates the money tree myth. Refraining from giving your children money is not about “tough love”; it’s all about letting them know that money is earned.

Money as a Reward for Good Behavior

When parents offer money as a reward for good behavior, kids might think they are “earning” it, and the parents might think it will lead to better behavior. Both the kids and the parents would be wrong. Rewarding good or even expected behavior with money can lead to a warped sense of entitlement for doing what is expected, which can get very expensive. If it will cost parents money to get better behavior from their children, who’s really in control? If, by good behavior you mean completing assigned chores on time or when asked, then that should be rewarded.

Money as a Substitute for Love

Due to the demands of life, it’s sometimes difficult for parents to give their time and attention to their children when they need it. It’s not unusual for parents to offer money as a way to placate their children or buy their happiness. However, when this “act of love” becomes routine, it could lead to resentment when the money stops. Children, who become accustomed to money as a replacement for love, may carry those expectations into adulthood, which could lead to similar habits when they become parents.

We’ve all experienced that momentary sensation of pleasure when we get a nice bonus or when we splurge on something we’ve always wanted. But, if you’re honest about it, you’ll admit that the sensation was just momentary and nothing that would make us feel much differently about where we are in life. Even if you were able to string together a hundred of those moments, it wouldn’t necessarily make us any happier, because we would need more moments to keeps that feeling. When kids see their parents trying to buy happiness, it becomes a pattern that is easily mimicked, starting at a very young age. If parents can’t learn to appreciate the lifestyle they have by pursuing more, their kids are likely to follow course with no guarantee of increased happiness.

Not Having Serious Goals

As young tots, children probably don’t have any sense of whether their parents have financial goals. Yet, at some point, we would like our children to understand the concept of setting goals and working to achieve them. Parents who do set financial goals, and back them up with actions, find it easier to transfer the concept to their children, largely because they actually believe in it. If we ask our child to set a goal and save his or her money to obtain it, they are much more likely to be successful when their parents talk about their own financial goals, and the importance of achieving them. When kids can see that their parents are serious about goals, planning and saving, they will find it a lot easier to emulate them than if they simply told the kids what they should do. It’s called “walking the talk.”

Watch Me and Learn

It’s scary to some parents just how smart and observant their children are – literal sponges that will soak up even the slightest detail in how we live our lives. Teaching children about money and imparting healthy habits about it starts with the parents own values, beliefs and habits. When raising children to meet the expectations we have for them, we first must be able to meet our own expectations for ourselves, because that is how our children will see us.