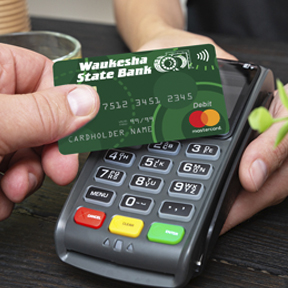 November 2020
Tap-and-pay technology, also known as contactless payment, allows you to complete transactions without physically swiping or inserting your credit or debit card at a payment terminal. It may seem strange at first, but you can use tap-and-pay with confidence — it’s a safe and reliable method for making purchases.

How does tap-and-pay technology work?

Tap-and-pay cards use RFID or near-field communication (NFC) technology to communicate with the payment terminal. Inside your card, a chip and an antenna send out radio waves containing a random, one-time encrypted number. According to U.S. News & World Report contributor Ben Luthi, these waves travel only a few centimeters — long enough to let you pay by tapping the terminal with your card or by simply holding it very close. When the terminal receives the card’s code via the radio waves, it can quickly and securely process your transaction. This same technology powers mobile wallet systems like Apple Pay and Android Pay. It’s also used for EMV chip technology, which requires you to insert your payment card into a terminal.

What are the advantages of using a tap-and-pay card?

Using a tap-and-pay card can reduce the time and hassle of making a transaction. Luthi notes that this technology works significantly faster than EMV chip technology. EMV chip transactions take 30 seconds to complete, but tap-and-pay only takes 13-15 seconds. Tap-and-pay is especially convenient if you live in a big city and frequently commute via mass transit. CNET reporter Ben Fox Rubin writes that several transit systems around the United States, such as New York City, Portland, and Chicago, have installed tap-and-pay terminals so travelers can spend less time on transactions at the turnstile. Tap-and-pay is also handy for international travel, as many other countries have adopted the technology to a much greater extent than the U.S.

Are tap-and-pay cards safe to use?

Tap-and-pay credit or debit cards are quite secure to use. Luthi writes that EMV chip cards represented a major security upgrade over the old swipe cards — and tap-and-pay cards utilize the same technology. Theoretically, a criminal could get close to you and use an NFC skimming device to steal the information transmitted by your card. However, even if crooks were able to pull this off, experts say the data they’d glean wouldn’t be enough to enable a fraudulent transaction in your name.

How can you protect yourself from tap-and-pay fraud?

The risk of fraud occurring during a tap-and-pay transaction is minimal. Some people purchase RFID-blocking wallets to protect their cards, but the Identity Theft Resource Center states that this is an unnecessary — and often expensive — precaution. You’re much more likely to be the victim of online fraud or data breaches. To keep your information safe, guard your online accounts with strong passwords, sign up for alerts from your credit card company, review your credit report for suspicious activity and, if you use a mobile wallet, protect your electronic device with the appropriate locks and codes.

You should certainly take the normal precautions against fraud, but tap-and-pay is a highly secure payment method that shouldn’t cause you any additional worries.

Waukesha State Bank is currently working to offer contactless cards, which should be available soon! Plus, our cards are instantly issued, so when you open a new account or want to upgrade your current debit card, you can get your new contactless card the same day! Watch for more information about our contactless cards coming soon.