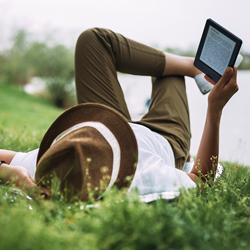 There’s nothing quite like kicking back in a lawn chair with a good book when summer arrives. If you are in the mood for a well-written story, consider checking out these Young Adult titles at your local bookstore or library.

“The Blood of Stars” by Elizabeth Lim
Elizabeth Lim’s “The Blood of Stars” duology started with 2019’s “Spin the Dawn” and concluded with 2020’s “Unravel the Dusk.” The books follow Maia Tamarin, a tailor who wishes to achieve fame and fortune in a male-dominated world. She competes in a Project Runway-style competition to win a spot at the royal court of her world, where she is challenged to make beautiful (yet impossible) clothes from fantastical materials like sunlight and the tears of the stars. A lot of readers compare the books to the legend of Mulan, and there’s a generous sprinkle of romance to raise the stakes.

“The Lady Janies” by Cynthia Hand, Brodi Ashton and Jodi Meadows
If you like reading books that take well-known stories and turn them on their head, check out “The Lady Janies” series, which is the name of both the collection and the team of authors that writes the stories. You can read the three books – “My Lady Jane,” about doomed Lady Jane Grey of England; “My Plain Jane,” which takes a new look at Jane Eyre; and “My Calamity Jane,” that pits Calamity Jane against a big bad wolf – in whatever order you choose, as the stories don’t connect. They use heavy doses of magic for entertainment, and readers on Goodreads praise all three for laugh-out-loud humor.

“Ember in the Ashes” by Sabaa Tahir
The latest installment in the “Ember in the Ashes” series by Sabaa Tahir, “A Star Beyond the Storm,” was released at the end of 2020. Read all four books in the series and see what the hype is all about. Its setting is inspired by ancient Rome and features strong characters and a rebellion against an empire. Its fans often compare its drama to the “Game of Thrones” series, since Tahir won’t hold back from major character death to move the plot forward.

“Old Kingdom” by Garth Nix
Another long-running series you can consider this summer is “Old Kingdom” by Garth Nix. Comprised of five books and two short story collections, the narrative takes place in the Old Kingdom, a typical fantasy world without current conveniences, and its modern neighbor to the south, Ancelstierre. While several groups in the Old Kingdom access a source of magic called the Charter, the series primarily follows the Abohorsen, tasked with keeping the dead at rest using a set of magical bells. Nix announced that a new book is coming to the collection in 2021, so this is the perfect time to catch up.

These are just a few of the great YA series you can try this summer. A librarian or bookseller will be happy to help you find what fits your style.